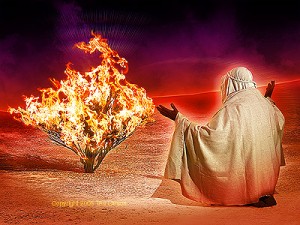 I am slightly now beginning to understand how powerful it was when God revealed His name to His children in the days of Moses (Exodus 6).  Out of the burning bush God said “I am the I AM” (YAHWEH/Jehovah).  We have that fun little, churchy saying of which most Christian’s are aware–where the Pastor says, “God is good”, and the congregation replies, “All the time”, then the Pastor says, “And all the time”, the congregation closing it out, “God is Good”.  Quite candidly, I think that is a slap and a spit in the face of God.  Most Jews will not even say nor write the name of God but motion up towards heaven when they are speaking of Him (or write G**).  Yet we are so nonchalant as to use such an adjective as “good” to describe God.  That’s as ludicrous as describing the universe as “big”, the sun as “hot”, or as silly as spitting in the sea.  “Good” is the basest of adjectives, yet we throw it around as though it could capture the nature and adequacy of God.  “Good” comes nowhere close to touching the tip of the grandeur that is God.  No adjective we have is sufficient to portray God (including grandeur).  The only way that we can truly express the essence of God is just as He expressed Himself, with His name. GOD is GOD.  No greater concept is held in the minds of humanity than “GOD”.  The very notion of God is on a plane far beyond our comprehension. When we say “GOD”, that is exactly what we mean; an idea so opulent, so copious, so far outside of our minuscule understanding, an idea that stretches the capacity of our contemplations to as close to infinity as a finite creature can come, that we cannot even begin to truly fathom the depth. And in our minuscule stupidity, the only thing in our minds that we can grasp to describe it, is GOD (and that’s only because He told us His name).  Anselm, the great philosopher, expressed the same sentiment, saying, “God is a being than which a greater cannot be conceived”. God is not merely good–GOD is GOD!