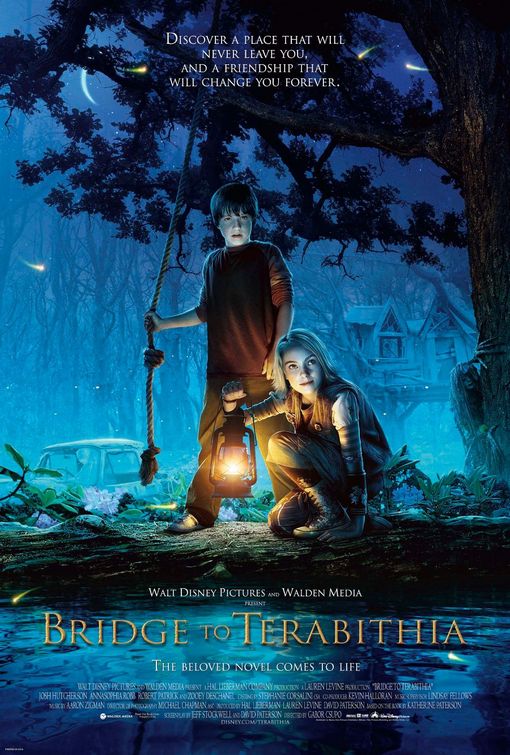 On Bridge to Terabithia (the movie) 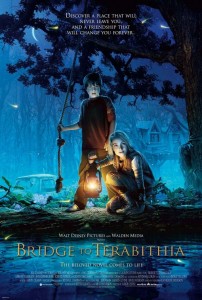 (SPOILER: if you have not seen the movie and you don’t want to know what happens, don’t read this yet)
This was a wonderful movie but a very stupid fairytale. My sister and my son and I went to see Bridge to Terabithia with mounting anticipation and hand rubbing excitement. We were not sure what to expect except the unexpected and this is why we anticipated it so. Sadly, we went to see a fairytale and somewhere along the way, that fairytale tripped over reality and ceased to be a fairytale. When I go to see a fairytale that is what I want to see! The whole idea that Terabithia was in the imagination made me uneasy from the start. Then the loss of the heroin made me shift in my seat a little more. Yet through it all, I anticipated what all fairytales offer…hope! I cried when the heroin was lost but secretly my tears were sweet because I just knew someway, somehow she would come back before all was said and done. She did not. When the credits rolled, I was…well I was angry…the beauty never dies…the hero never loses….or if she dies, she comes back more beautiful than before and if he loses he comes back more courageous than ever…so what gives? How can you claim to make a fairytale and then steal away the reality of fantasy and the reality of hope? Yah, Bridge to Terabithia was a wonderful movie but a very stupid fairytale. (See the blog titled “On Fairytales and Myth” for more on this topic.)
If I were to rewrite Bridge to Terabithia…

> Terabithia would have been an actual place.

> The imagination would have only been the key, which opened the door into Terabithia.

> Leslie, the heroin, would not have truly died. Her parents would have found her clothes along the banks of the river and have concluded the worst.

> Jesse, the Hero, (with his little sister as his side kick) would have charged into Terabithia to rescue Leslie after realizing that she had been kidnapped by the dark forces at work therein.
(I do want to mention that Leslie, after going to church with Jesse, said something that will forever be one of my favorite quotes. They were sitting in the back of the truck discussing Jesus, heaven and hell, and Leslie said something like, “You believe in Jesus because you have to and you hate it. I don’t have to believe it and I think it’s beautiful.” Right there she captured the beauty and power of myth. If those little religious kids (and people) would just open their eyes and truly read the Bible they would see how powerfully mythic its truths are. Maybe someone should read The Lion the Witch and the Wardrobe to them! That is exactly what Lewis was trying to say in his book…but its kind of ironic that such a point would be made in a movie that completely misses the fairytale wagon…maybe I should read the book…if I had known there was a book I would have read it first…and if history tells me anything, Hollywood has a way of
butchering books…maybe that’s what happened to this book…)

Next Post
Only the Human Who Loves Myth Truly Tastes Existence